Rejuvenate, resurface and tighten the skin

TIXEL® is an award-winning treatment and one of latest technologies we offer at Ace Aesthetics. It uses heat to rejuvenate, resurface and tighten the skin in a process known as ‘thermal fractional skin rejuvenation.” It has ablative and non-ablative settings to tailor treatment to the individual, and is suitable for use right up to the lash line for crepey skin around the eyes, without the downtime and side effects of regular lasers. Tixel® is versatile, using a heated plate to deliver the required amount of heat to the surface of the skin very quickly, without damaging deeper skin tissues.

The top skin layer is vaporised at the sites where the skin makes contact with the Tixel pyramids. Vaporisation leads to removal of tiny portions of the epidermis. This stimulates new epidermis to form. This is fresher, has less pigmentation and sun damage, and gives the skin an even glow with a smooth feel. There are effects on the dermis, which is lower down in the skin, as well. The heat that reaches the dermis and causes the tiny zones to coagulate. This in turn causes fibroblasts to start producing collagen which takes a period of three months or more to develop fully. The collagen boost in the dermis improves lines and wrinkles, tightens loose skin and sagging, and reduces the appearance of acne scars.

Tixel treatment can be applied to any areas in which there are concerns.

The most commonly treated sites are;

Backs of the hands

What happens during the procedure?

The skin is gently heated using a grid of tiny pyramids, a sterile titanium tip which is heated to 400 degrees C, approximately 1 cm square and contains 9 columns and 9 rows of tiny pyramids (totalling 81). The tip makes brief contact with the skin, where it transfers thermal energy to the upper skin layers, creating micron sized pores. The energy transfer can be controlled according to the treatment area and condition being treated. This is adjusted by varying the tip’s skin exposure time as well as its thermal conductivity. There is no laser, injection or radiation involved. The tiny little microcrusts can be seen in a grid pattern as shown in the picture below. When compared to fractional CO2 laser, there is much less charring and redness which means that make-up or a tinted moisturiser can be applied early on.

Aftercare Advice
What is the downtime?

One of the main attractions for Tixel treatment is that it has far less downtime than other resurfacing technologies. The amount of downtime incurred depends on the strength of treatment. If a light Tixel treatment is required then it is possible to apply make up within a couple of hours and return to work. If a more intensive treatment is required then we will recommend a couple of days off work, as this is will cause a spell of skin redness, with some scabbing. It is usually possible to wear make up after the second day.

What happens during the treatment?

Treatment takes between 30 to 90 minutes depending on the size of the area which is treated.The treatment is remarkably comfortable and can be performed without anaesthetic cream.

However, we do also offer the option of anaesthetic cream for 30 minutes beforehand to maximise comfort, and because the eye and mouth area can be more sensitive.

Several shots, each lasting a fraction of a second, are placed in a row so as to cover evenly the whole area being treated. A tiny sting, if anything, may be felt with each shot.

How often are treatments required?

Your practitioner will discuss the number of treatments your skin requires with you at your consultation. Usually three to five treatments are required. Treatments are usually 6 to 8 weeks apart. Ablative treatment take fewer sessions, but each one is more aggressive so involves a couple of days of the skin crusting and scabbing. Most patients prefer to stay at home during this time. Non-ablative or channel treatments will take a few more sessions, but there will be no need to have time off work.

How does Tixel stand up against other treatments?

What is open channel mesotherapy?

Open-channel treatment makes the skin porous in order to allow penetration of topical treatments. This can be used in treatment of skin pigmentation problems such as Melasma or Hyperpigmentation.

Both ablative and non-ablative treatments can be given.

There is less redness and fewer microcrusts form. As non-ablative treatments are gentler, they are suitable

for those with less available time for recovery. More treatments are required to get similar effects to ablative treatment. 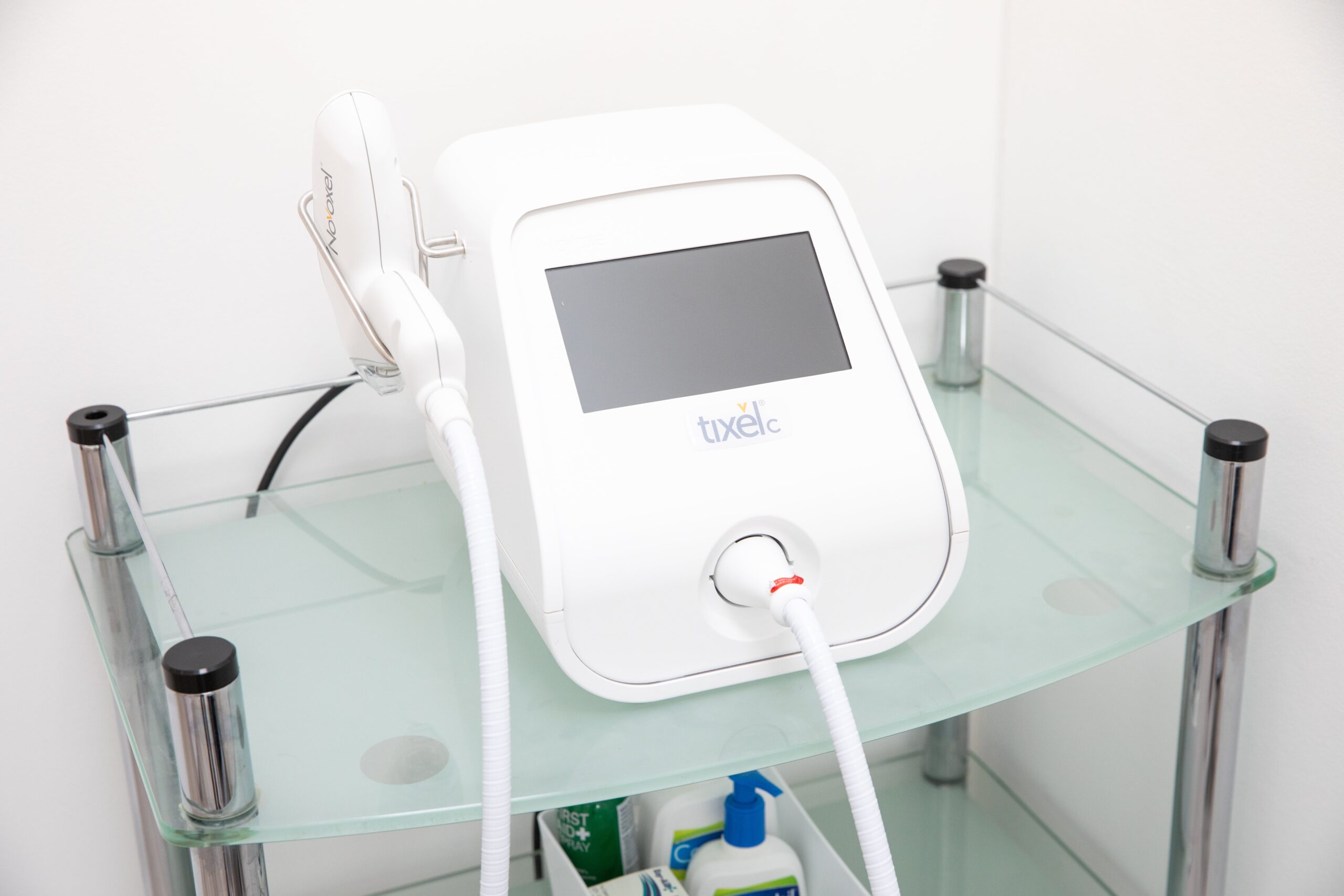 Had the best laser treatment for pigmentation! Really cleared my skin up. Also get the laser hair removal with sue which is fabulous . Keen to try the ClearLift laser for facial rejuvenation next. Love Sue, she is always so professional and prices are very competitive!
JoanneAce Aesthetics Patient
See all reviews